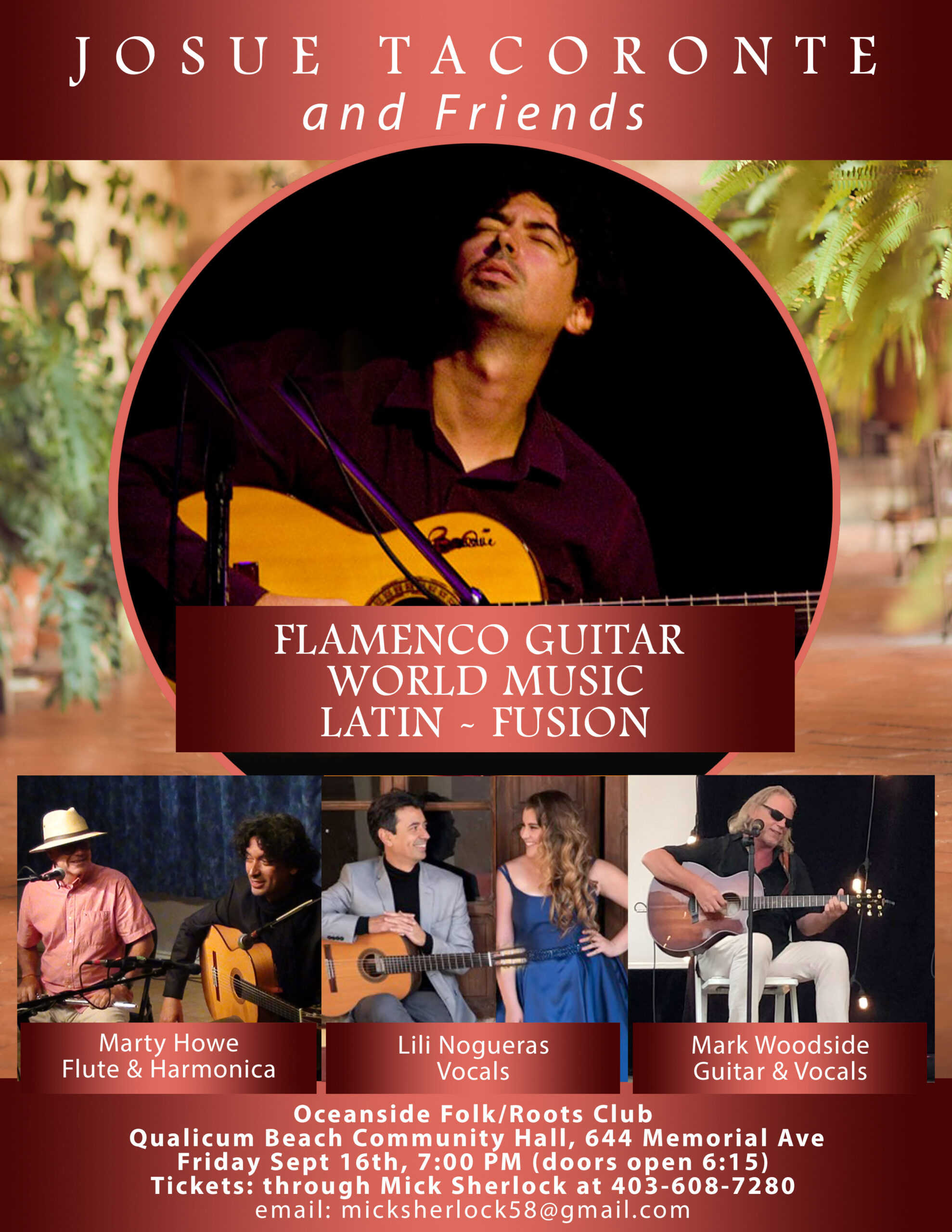 Began his musical studies at the age of 6, and continued his higher guitar education at the most prestigious Conservatories in Cuba.

Worked as a composer, music director and musical arranger in the most important Spanish Ballet and Flamenco Companies in Cuba. As his reputation spread internationally, he was invited to do the same in Mexico.

One of his greatest musical achievements has been his consistent contribution to recording the Cuban guitar repertoire, also crossing over into other genres such as flamenco without losing Cuban essence.

Multi-instrumentalist playing chromatic harmonica and flute. He will join Josue in many Flamenco/Fusion pieces.

Acclaimed by the critics, Josué Tacoronte, guitarist, composer and musical arranger was born in Havana, Cuba on October 17, 1977. He began his musical studies at the age of six with the piano teacher Antonio Penalver. At the age of ten, he enrolled in the Guillermo Tomas Conservatory of Guanabacoa, receiving his first formal classical guitar lessons by Rosario Castro. He continued his higher guitar education at the Amadeo Roldán National Conservatory graduating in 1996, under the tuition of professor Roberto Kessel. As a student he won four national contests at the Amadeo Roldán National Conservatory and received the first place for Best Interpretation at the Guillermo Tomas Contest. Since then he achieved a highly successful performance career.

One of his most important musical achievements has been his consistent contribution on research, musical arrangements, performance and recording of the Cuban guitar repertoire that includes pieces by composers such as Leo Brouwer, Ernesto Lecuona, amongst others, crossing over into other genres such as flamenco without losing Cuban essence.

In 2007 he recorded his first album “Josué Tacoronte y Skpao” with original music that took him back to performing again in Cuba. In 2010 he released his second album “Mexico Flamenco “. And in 2012 he recorded “Brouwer Flamenco” produced by Leo Brouwer itself and for which he was awarded “Best Concert Interpreter” at the International Festival CUBADISCO Awards, in May 2013.

As a soloist, he has performed in Cuba with the Havana Youth Orchestra and in Mexico with the Queretaro Philharmonic under the baton of directors Jorge Lopez Marin and Esperanza De Velasco.

Tacoronte has been a member of the jury in several international guitar competitions and has given a number of workshops and master classes in several International Guitar Festivals, Music Universities and Conservatories.

He performed as a guitar instructor at Centro Proart (2001-2010), Instituto Tecnológico de Monterrey Campus Querétaro (2003- 2004) and currently performs at the Ensamble Music and Dance Academy as Director. He founded the Cultural-Ensamble Festival in Queretaro, México, now on its fourth edition.

He is an active member of The National Union of Writers and Artists of Cuba (UNEAC). The Cuban Association of Musical Author’s rights (SGAE). Alhambra Guitar, using new model flamenco guitar (Mengual & Margarit)